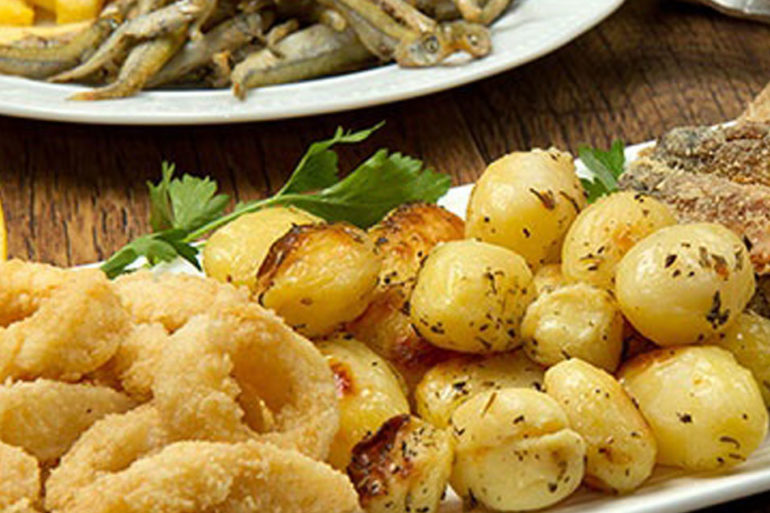 In the south of the Iberian Peninsula we find the coastal city of Malaga, where a soft climate prevails for the whole year. The Andalusian city owns an important natural heritage with a big environmental value on its beaches, mountains and rivers, and a prestigious cultural heritage which you can get to know visiting the museums, art centers, ancient architecture and castles.

Malaga is well-known because of its exquisite and varied gastronomy and traditional dishes. A big part of its fame is due to the weather, which invites people to go out often to have lunch and dinner, and along with the “tapeo” people can taste different meals.  Now we are going to show you the typical dishes of this beautiful city.

Richness and simplicity describe the Malaga cooking, a cuisine that uses the natural ingredients of the Mediterranean diet such as vegetables, legumes, fish and meat. Never forget to use the olive oil, as it is an essential component.

Pescaíto frito. A frying of anchovies, whiting, squids, cuttlefish and “pelaya” which are dipped in flour, yeast, olive oil, garlic and salt. It is a typical tasty meal in beach-bars and terraces. Also known as Fritura Malagueña.

Migas. That is one of the most traditional and easy dishes to cook.  The main ingredients are hard bread, garlic bulb, olive oil, water and salt. There are many varieties of this recipe which use other traditional toppings (such as chorizo) of each area.

Ajoblanco. Original dish from Axarquia. It is a cold soup similar to gazpacho with crushed almonds, breadcrumbs, grapes and raisins that give a sweet-sour taste.

Berzas a la malagueña. Appropriate to get warm in the cold winter.  It is a stew of legumes accompanied by meat and vegetables to which cabbage and stirred red peppers, cumin, garlic and pepper are added.

La porra antequerana. It is a cold cream original from Antequera city. The main ingredients are hard bread, peppers, garlic, ripe tomatoes, vinegar, salt and olive oil, but also you can add eggs, tuna and ham.

Ensalada malagueña. The salad is served cold and it is perfect for summer days.  It is made with potato chunks, bitter orange from Malaga, codfish and olive oil. The codfish must be soaked and then grilled, afterwards crumbled boneless. Hard-boiled egg can be added.

Papas a lo pobre. In other times it was the food of poor people. It is a potato stew and a good and healthy alternative to fried potatoes that can be served with fish and meat dishes. It is also prepared with peppers.

Feeling hungry already? These are only some of the foodie wonders you must taste if you visit Malaga. Although you can also try and cook them yourself now that you know the main ingredients. What we can ensure is that you will not regret trying any of them.