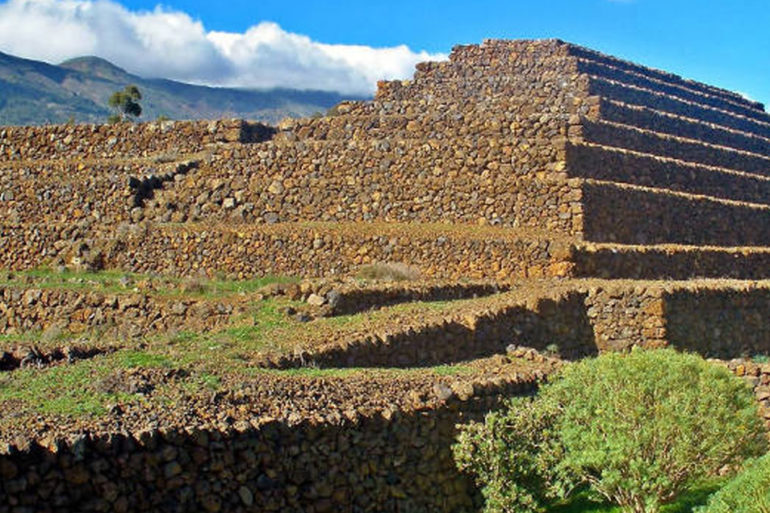 The mystery of the Güímar Pyramids in Tenerife

Up to date no one knows who built the Güímar Pyramids not even when. The mystery continues in Tenerife island, but let’s start from the beginning.

The town that gives a name to the pyramids is situated at the south of the island. Güímar is well known because of its nature and vast gastronomic and cultural offer. Is an idyllic place to practice sports such as hiking or biking, and it also has great natural reserves.

In this wonderful place one can find the Ethnographic Park of the Pyramids of Güímar, also known as “Majanos de Chacona”, which we are about to talk about.

Six step-like pyramids form this landscape that has a great culture, historic and astronomic value, catalogued as a Good of Cultural Interest.

It’s interesting to see these constructions follow the same pattern as the Mexican, Peruvian and Mesopotamian ones, which caught the interest of many scientists. Actually, after some investigations, some attribute their origins to the ancient civilizations; arguing that they could just be carves done to huge rocks.

On the other side, Thor Heyerdahl, the founder of the park expanded the idea of the pyramids being a construction made of different stone blocks, used to clean and harvest the fields; theory accepted by the majority of the archaeologists. Also, according to Heyerdahl, it is observed that the stones have been cut and the grounds well prepared for such construction with volcanic stones.

What is also remarkable is the pyramids have been built facing the changes of stations, making it evident that their position is not random.

The Ethnographic Park was founded on 1998 as a way to guarantee the state of the pyramids and keep on studying their origins. A few areas have been prepared for tourists to know more about the history of these mysterious and ancient constructions.

This building was built on the 19th century, and it is split into a few rooms which show pictures, sculptures, ceramics and so on. Right in the entrance there is the statue of Kon-Tiki, the God of the Sun.

Placed in an underground building, it projects a documentary about the expeditions and theories of Heyerdahl, and explains the coincidences between Güímar and other cultures.

The gardens have many of the endemic species of the islands, and all the plants are identified with their common and scientific names.

One of the most interesting spots there is the Poisonous Garden, which shows the most dangerous species of the world, and we will learn about their medical uses, myths and legends.

Don’t miss the chance to visit this magical and mysterious place, and if you are interested in the volcanic landscape we highly recommend the visit to the Natural Reserve of Malpaís de Güímar, given its high natural value.