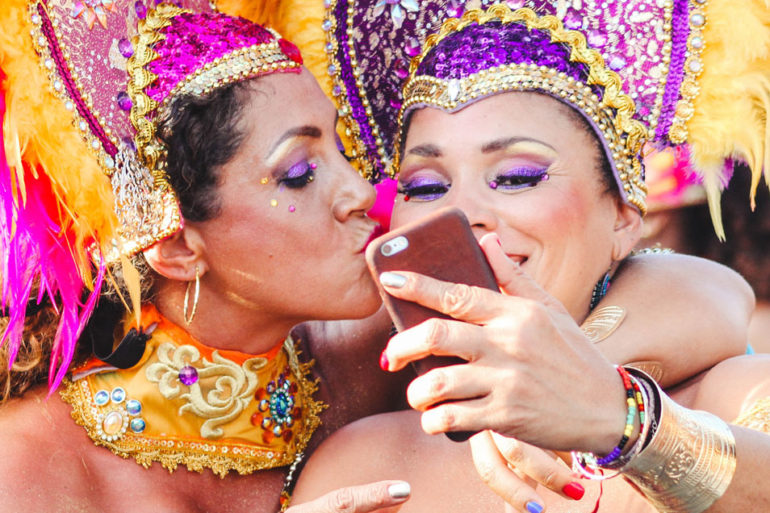 Festivals in the Canary Islands rival some of the world’s biggest carnival events. As colourful as Rio’s Mardi Gras, as vibrant as any Caribbean carnival and as fun-filled as the famous New Orleans holiday event. Canary Island carnivals are not to be missed. Taking place in February, when the days and nights are warm enough to celebrate on the streets – whether you’re dressed head to toe in fancy dress or sporting your best holiday outfit. As well as parades, concerts, drag queen contests and even some social and political critique, there are also children’s parades and events. Fun for families, couples and groups travelling together – everyone can join in the party atmosphere.

Dates for the Tenerife carnival vary slightly from year to year. For 2018, the carnival is taking place from 7th-18th February, when a variety of colourful events will fill the island’s streets. The key date for many holidaymakers is the 14th February – Ash Wednesday, when the bizarre and mesmerising Funeral of the Sardine takes place. Proceedings begin with the funeral parade, where a giant model sardine is the centre of attention. If that sounds a little drab, it’s worth noting that the ‘mourners’ following the stricken sardine through the streets are all in fancy dress. As the parade draws to a close the sardine is set alight and the celebrations really begin. Expect fireworks – in every sense.

Depending where you visit on the island of Lanzarote, the carnival festivities run from 2nd – 18th February – but in Costa Teguise the party carries on into March (1st – 4th). Each resort has its own carnival with its own theme.  The biggest carnival on the island is held in Arrecife – with a spectacular float parade on Carnival Monday – 12th February. Just like Tenerife, Lanzarote also holds a burial of the sardine parade – with accompanying floats, fancy dress and festivities on 14th February.

Expect a riot of colour, dance troupes, singing and fancy dress – with more than a hint of creative and mesmerising sights. Each carnival hosts its own events, which usually include parades, parties and plenty of drag queens. Tenerife carnival’s legendary street parties last from around midnight until the early hours of the morning, and while things never get too rowdy, the vibe is definitely hedonistic.

If you want to truly experience the carnival celebrations like a local, it’s best to join in with the ‘masquerade’ and dress up. This year’s chosen theme is ‘fantasy’. So plenty of scope for creativity. Don’t be too concerned about the theme – it’s all about having fun. A colourful wig and a sense of adventure should see you in the midst of the party. If you’d rather just enjoy the spectacle from the sidelines, the parades, dancing and concerts are all hugely entertaining.

The whole of Spain celebrates carnival season, but Lanzarote mixes things up by choosing different themes for various regions. Like many other Festivals in Spain, you’ll find vibrant colours, singing and a party atmosphere. The main Lanzarote carnival is held in Arrecife – where this year’s theme is the Enchanted Forest. Expect mythical creatures, fairies, giant trees and bears to be among the many fancy dress costumes worn for the parades and events. The main carnival procession takes place on Monday 12th, with floats leaving the Ciudad Deportiva and heading along the Vía Medular until they reach the Recinto Ferial.

You’ll never go hungry during Tenerife carnival, but you may need to plan ahead if you’re looking for nutritious local eats. Tempting stalls line the parade routes in Tenerife, selling fast food, churros, and chips to keep you partying late into the night. Some truly indulgent calories represent the carnival atmosphere, but a hearty meal in the hotel guarantees you’ll be well fed and ready for a long night of partying. If you’re looking to enjoy the carnival atmosphere from a local perspective, seek out Restaurante Los Pinchitos. A favourite among Santa Cruz residents, the decor may be basic, but the food is second to none.

Just like its Canary Island neighbour, Lanzarote carnival dishes up calories in bountiful quantity from the street food trucks that line the parade routes. Focussing on fast food, it’s a quick fix if you’re hungry at 2am. For a more leisurely meal, with plenty of local flavour, head just out of Costa Teguise and track down Los Aljibes de Tahiche. North of Arrecife, the restaurant is a quieter place to sample some Canarian food before immersing yourself in island life back at the carnival. Hospitality is served up in hearty measures, expect big plates, a warm welcome and the chance to sample some craft beers. No need to worry about your Spanish, English-speaking staff will help you out with any menu queries.

Experience Tenerife carnival at its very best by staying at one of our Puerto de la Cruz hotels during the party season. Close to the carnival action, our hotels offer a place to relax and recharge your batteries away from the heady mix of colour, dancing and party atmosphere. Choose your ideal hotel to enjoy the carnival season, from either Blue Sea Interpalace 4* and Blue Sea Puerto Resort 4*, or Blue Sea Costa Jardin and Spa 4*. All are fully-equipped with plenty of activities and facilities to keep you entertained.

Live island life to the full amidst one of the world’s biggest carnivals. Our hotel in Costa Teguise is ideally placed, putting guests at the heart of the action for Lanzarote carnival season. Stay with us at the Blue Sea Costa Bastian 4* in early March to enjoy the Costa Teguise carnival right on your doorstep or, if you’re holidaying during February, you can make a short journey south to Arrecife, when the biggest celebrations on the island take place. As well as the colourful delights of the carnivals, our hotel has a wide selection of facilities and activities to choose from, including a mini club for kids, pools, Jacuzzi and a solarium.