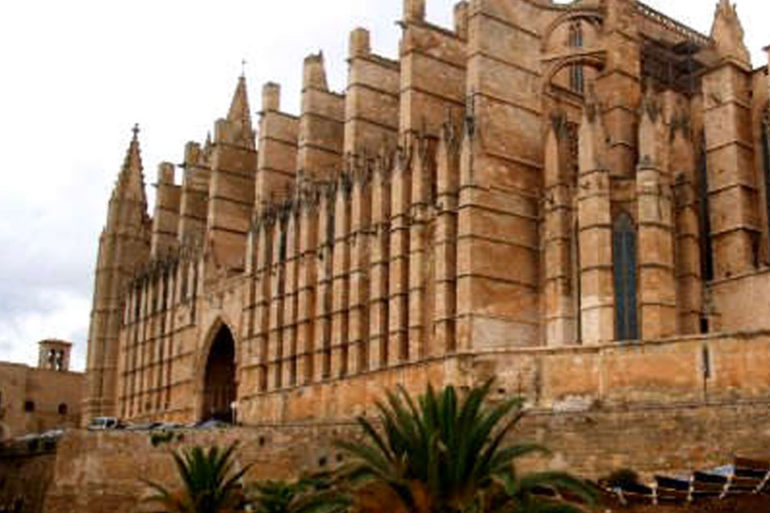 Palma in one day. An easy guide to visit the city

It is often said that Mallorca is only sun and beach, but we want to show you the island does, in fact, much more to offer as we already tried in the Frédéric Chopin. Cold winter in Valldemossa. In this post we are going to focus in Palma, the capital of Mallorca.

The city of Palma possesses an intense past and a great history. Its foundation took place the 123 b.C by the Romans and many civilizations stablished themselves in such beautiful city ever since, civilizations such as the jews, arabs and christians with the king James the 1st, who introduced the basis of the Majorcan society which persevered up to date.

In such an old city you can spend a very interesting journey visiting its most special places, and here we bring you a route for you to see everything you need in just one day.

We start at Plaza de España, right after finishing breakfast at the Café 1916 or the Bar Cristal, and we will walk down to La Rambla. Wondering in this street full of flower stands we will reach the Gran Hotel.

This modernist building was built in 1903, being the first hotel solely dedicated to tourists in Palma, focused on high class guests such as intellectuals and artists. Nowadays it is home of the Fundación La Caixa, and it works as an art gallery and conference center. It is situated right in front of the Weyler square.

If you follow the path you will reach Jaume III Avenue, a street with great ambiance and with the most glamorous stores. You can’t leave the street without trying the ice cream from Ca’n Miquel. At the end of the street we arrive to Paseo Mallorca, and turning left you will arrive to the city walls, known as Es Baluard,

Es Baluard functions nowadays as a museum of modern and contemporary art, and has more than 500 paintings, drawings and sculptures from the most important artists to show. As said, it is part of the old city walls, and from the top of the building you get great views of the Paseo Maritimo and the cathedral.

If it’s lunchtime already once you are done, we recommend you to go right to Santa Catalina, the trendy area of Palma, filled with many restaurants offering worldwide cuisine from typical Majorcan restaurants to Thai or Caribbean food. If you are a foodie, this is the place to go.

We still have a lot to see, so if you are in a hurry instead, we will make you go back to Plaza Juan Carlos I (commonly known as the turtles’ square), right at the beginning of Jaime III. There you have the Bar Bosch, one of the eldest bars in Palma. Its specialties are the so-called Llonguets, a sandwich done with typical Majorcan bread, and pica-pica, a stew made with squid, although you can also eat tapas. We recommend you to take a seat in its terrace as the ambiance is great.

Now we will keep walking through Es Born, one of the most beloved streets of the City, to end up in the Plaza de la Reina (Queen’s square) and the Jardins del Rei (Gardens of the King). At the end of the Jardins del Rei you will find yourselves in the most known spot of Palma, the cathedral. 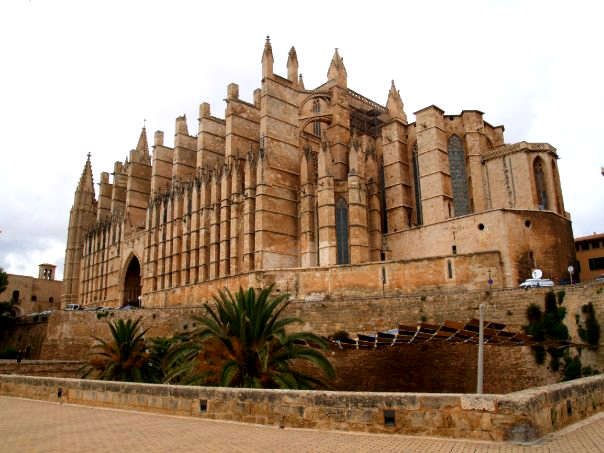 La Seu is the name the Majorcan people gave to the cathedral, and it is worldwide known for its size and beauty. Its construction started during the 14th century where a Mosque was, and it has a gothic style with a great baroque influence in its inside. Antoni Gaudi was in charge of the refurbishments taken at the beginning of the 20th century. The building is reflected on the lake right in front of it, and its glass rosette is catalogued as one of  the biggest of the world. Right next to the cathedral you will find the Palau de l’Almudaina

This palace, also built in gothic style is situated right next to the cathedral, giving a great view from the Paseo Marítimo. It was built during the 13th century and was the residence of the Island’s governors. Nowadays it is the official residence of the royal family although it is only used for events and celebrations, and it remains opened to the public during the whole year.

Once you have seen this great spot, you will have to go through the Palau Reial street to find the Major House.

The Major House was built in baroque style and is situated in the Cort square. From the facade we highlight the clock, know as “En Figuera”, the snail and the dragon. The nail and the dragon are a tribute to the architects, whose surnames were Bover and Drach (snail and dragon in Mallorquin). Right infront of the building there is a +500 years old olive tree, as a celebration of peace.

Hungry? We obsess with the food… Listen to us and move to Santa Eulalia Square, right behind of the Major House. There you have a wonderful church and Ca’n Joan de s’Aigo.

This bar is found in Carrer Sans, and it has the best ensaimadas of the island. It also features some of the best artisan icecreams, hot chocolates and cuartos (a very fluffy cake, typical from Majorca). We are probably going to have to queue to get in, but it is totally worth the wait. The place remains unchanged since 1700, and all the furniture has the antique combination of wood and marble, as if time didn’t pass.

Once we are finished we will move towards the jew town.

It is situated between the Santa Eulalia square and Porta des Camp. Through its calm, narrow streets many intellectuals, doctors and astronomers grew, and some of the old houses still remain.

Once we are done with these streets, and if there is still time, we recommend you to go back to the starting point in Plaza España and take the bus or taxi to the Bellver Castle.

It is one of the few castles with round shape left. It was built on the 15th century by James the 2nd. Bellver means good sights, and from the top of the castle you will find astonishing views of all the shore of Palma de Mallorca. It is used as a museum of antique art at the moment.

You may stop now.

When the night comes, the most lively place to go out is Paseo Maritimo, or Santa Catalina, we spoke of it before.

We hope this guide doesn’t stress you and makes your day in the city easier. Enjoy Mallorca!