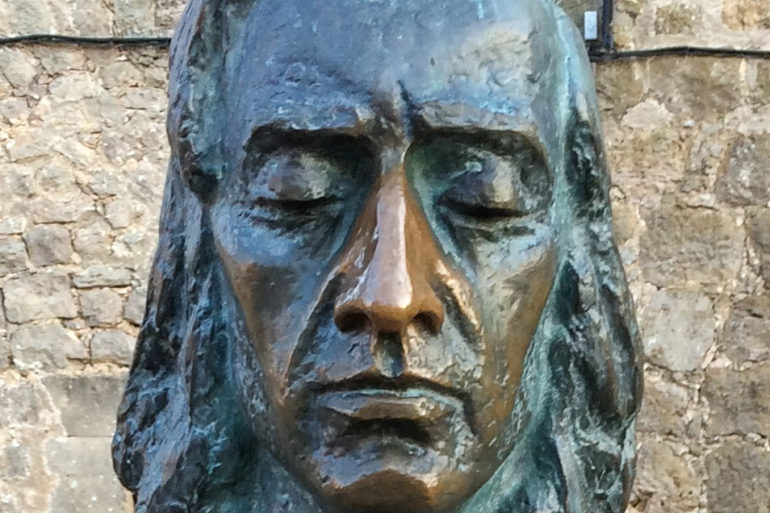 Frédéric Chopin is a well known Polish composer and pianist who flied to Majorca in November 1838 with his partner and author George Sand (Aurore Dupin), and her two children. They met in 1836 in the city where both were living, Paris.

At that time, the musician’s health situation was bad and one son of Sand was suffering from rheumatism, therefore on the arrival of the winter they decided to change their living place.  They chose the island of Majorca because of the soft winter, but the heavy rains and fog of that year didn’t help to improve Chopin’s health, to the point that he was diagnosed tuberculosis at the beginning of December.

In Valldemossa, a little village in Serra de Tramuntana, they rented a cell at the Carthusian Monastery which was also a former royal residence.  They were surrounded by beautiful gardens and a quiet atmosphere that helped them find inspiration to create their own art.

Soon, the musician received a Pleyel piano from Paris and with it he composed great pieces. Protected from a heavy rain and sick, Chopin composed many of his Preludes, Polonaise in C-minor, Mazurca in E-minor and many more. The piano is still today at the same cell at the Carthusian.

The writer George Sand had time to write her novel Spiridion and A winter in Majorca, book that reflects the hard situation she had that winter dealing with the health problems of her family, and also wrote about the constant encounters against the old and conservative Majorcan society.

Finally they left the island the 12th February of 1839 to go back to Paris, leaving a big mark in the island that will last forever. Nowadays the doors of the cell where they lived for two months are opened for the tourists to enjoy and there is a museum in which you can find original documents of the couple and also the piano that Chopin received from France.

In the heart of the Sierra de Tramuntana there is a little village populated by 2000 people in a valley full of olive and almond trees, which take the visitor to other times. It is situated 17km away from Palma de Mallorca and at a height of 436 meters above sea level. The beautiful nature of the town makes it the ideal place for mountain hiking, as Camino del Archiduque where the sea on one side and the green mountains on the other side are with you throughout the whole route.

The main attraction in Valldemossa is the Royal Carthusian and also the cobbled streets. This beautiful town not only seduced Frédéric Chopin and George Sand, but also it was a source of inspiration to Archduke Ludwig Salvator of Austria, Jovellanos and Rubén Darío who lived there for some time.

We assure you a great and enriching visit.