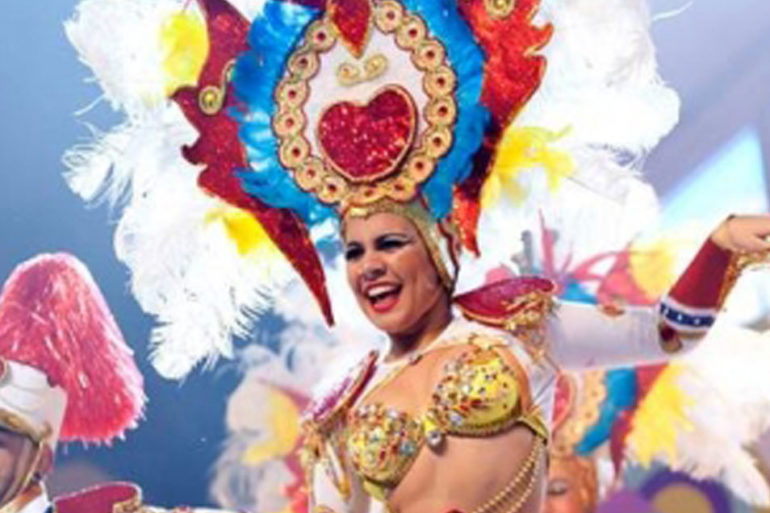 Carnival of Tenerife. Live the magic of the party

The Carnival of Tenerife is one of the most popular in the world. The island gets full of colors, happiness and music that fill streets day and night for two weeks. Towns and cities join to the celebration, although the main shows are in Santa Cruz de Tenerife and Puerto de la Cruz.

The festival starts with the Queen Carnival election on a 1200 meter stage. The protagonists wear dreamy and heavy costumes which can weigh more than a hundred kilos, therefore  a lot of strength and practice is needed in order to hold the weight without losing balance.

A few days later there is a procession that announces the start of the Carnival, where different musical groups cross the streets for hours, filling the island with rhythm and ebullience.

During the next days the music continues in the streets with performances and the Coso parade, a spectacular procession where thousands of people go. Besides, it is organized a childish queen carnival election and contests of carnival groups.

The Burial of the sardine announces the end of the festival and Puerto de la Cruz is one of the places where it is celebrated with more splendors. People say goodbye to Don Carnal, the symbolic fish, surrounded by widows that cry inconsolably in a funeral parade.

The definitive closing takes place on the Piñata Chica, a celebration that has musical performances and parades saying goodbye to the carnival until next year.

The island has an exceptional weather and soft temperatures all the year, which lets the visitor to enjoy a comfortable and quiet trip. The capital city and its surroundings offer entertainment day and night.

Santa Cruz city is bordered to the north with Anaga Mountains where people can go trekking and make rural tourism. Besides, the visitor will find viewpoints and camping areas to have an unforgettable experience. Regarding to cultural, Santa Cruz gives the possibility of visiting the urban old town and its museums, theatres and exhibition halls.

You can stay in our hotels in Puerto de la Cruz. You will enjoy the amazing landing views from Puerto Resort by Blue Sea 4* and Interpalace by Blue Sea 4*, where you will have at your disposal a lot of activities.

We are waiting for you!